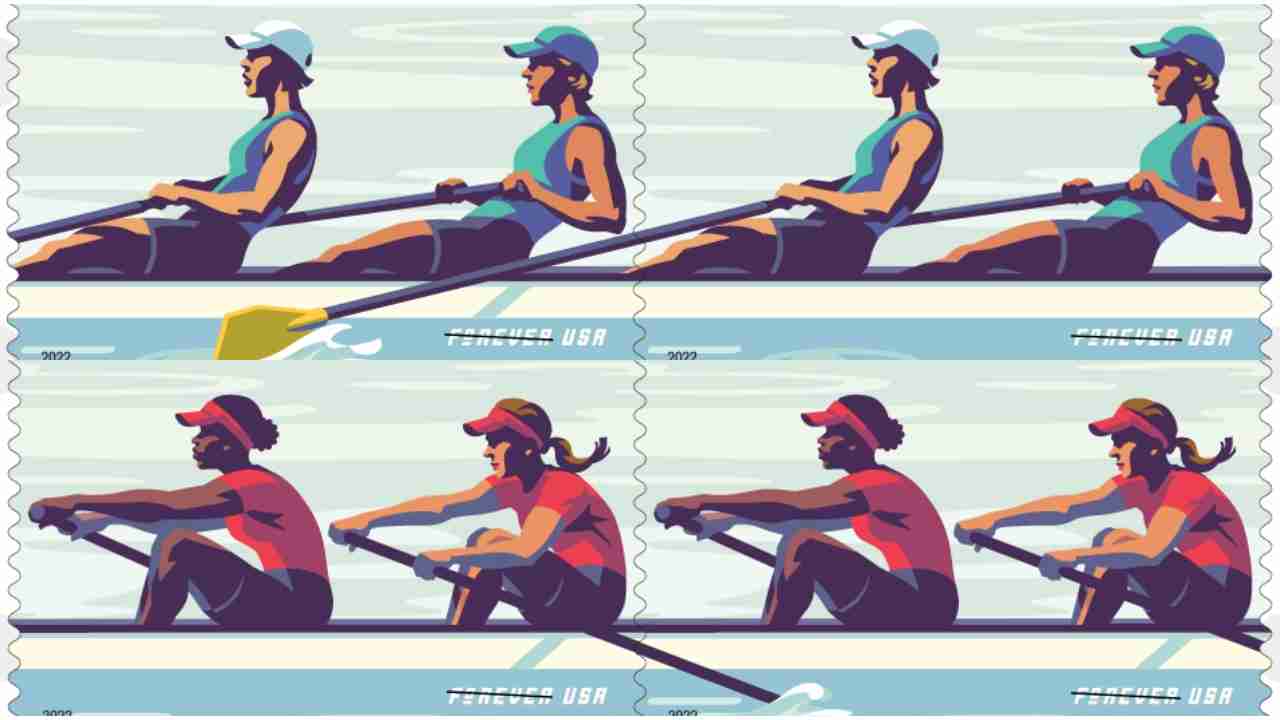 PHILADELPHIA — In celebration of women and their advancement in the sport of competitive rowing, the U.S. Postal Service issued a pane of 20 Women’s Rowing Forever stamps today. The dedication took place at the Philadelphia Girls’ Rowing Club on the bank of the Schuylkill River. The rowing club is the oldest women owned and operated in the United States. It was founded in 1938.

“The images on these stamps capture only part of the true picture of competitive rowing as a synchronized, graceful and demanding sport,” said Cara M. Greene, the Postal Service’s controller and vice president, who served as the stamp ceremony’s dedicating official. “Women’s competitive rowing requires strength, endurance and determination, and we hope these new stamps inspire you to push yourself harder to reach your goals and succeed at anything — keep rowing.”

American women have excelled in rowing. The first time they competed in the Olympics, in 1976, the eight-person team won bronze. The women’s eight went on to win gold in 1984, the next games in which the United States participated.

The sports world largely excluded women until the social movements of the 1960s opened the door for dramatic change. In 1972, Congress amended federal education law by adding Title IX, which prohibited gender-based discrimination in federally funded education, including athletics. Although some colleges and universities reacted slowly, women pressed them into opening up varsity sports and disbursing funding equitably.

Almost overnight, American women drew international attention: the celebrated “Red Rose Crew” won silver in the 1975 World Rowing Championship. The 1975 and 1976 champion teams both drew heavily from Ivy League schools with long-time men’s rowing programs, but also from the University of Wisconsin as well as from California.

The more traditional Ivy Leagues, some of which were just opening their enrollments to women, took longer to adapt to the new mandates. The men’s teams at Harvard and Yale had been racing each other since the 1850s, and some university administrators could not fathom women in such a strenuous and macho sport — until they started winning big.

In eight-person “sweep” rowing, the rowers sit on sliding seats, facing the stern, or rear, of the “shell” (boat), and each crew member wields one oar for four per side. In the stern sits a ninth person, the coxswain, who steers the shell with a rudder and, as the only person facing forward, serves as the crew’s eyes, shouting commands and encouragement.

Sitting directly across from the coxswain, and facing her, is the “stroke,” the crew’s leader. She sets the pace, combining ferocious strength with a fine sense of rhythm. As one, the eight lean forward to dip their oars (the “catch”), straighten their legs and push back as they pull the oars through the water (the “drive”), raise the oars from the water (the “release”), and turn them parallel to the water to maneuver them back for the next catch (the “feather”), over and over like a machine.

Competitive rowing also includes “sculling,” in which the rowers — one, two or four in a shell — use two oars, as well as two- and four-person sweep teams. Since 1984, women have brought home gold, silver or bronze medals in at least one of the rowing categories at each Olympics — except 2021. The eight-woman sweep team began a glorious second winning streak in 2004, attaining silver that year and gold in 2008, 2012, and 2016. The Postal Service is proud to honor these athletes and their sport with these Forever stamps.

“Rowing makes a positive impact, physically and mentally, on women and girls of all ages and Title IX opened the opportunity for women and girls to grow and grow,” said Sophie Socha, president of the Philadelphia Girls’ Rowing Club, who spoke at the ceremony. “These stamps are timely, and a much-appreciated tribute to this achievement.”

Nancy Stahl designed and illustrated the stamps and pane.

The Women’s Rowing Forever stamps are being sold in panes of 20 stamps. Four different stamp designs are featured and arranged as five staggered rows of four. News of the Women’s Rowing stamps is being shared with the hashtag #WomensRowingStamps.