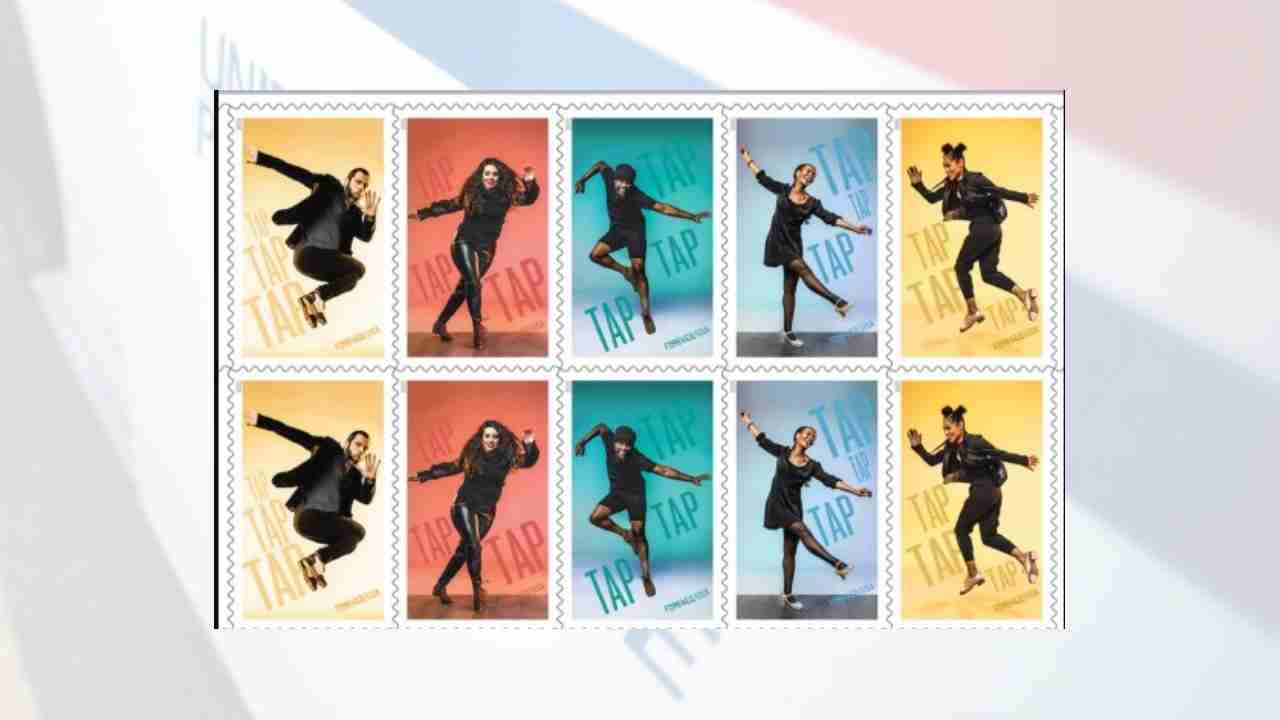 NEW YORK — The U.S. Postal Service issued the Tap Dance stamps today during the Tap It Out — Tap City, New York City Tap Festival in Times Square. The Forever stamps are now for sale at Post Offices nationwide. News of the stamps is being shared with the hashtags #TapDance and #TapDancestamps.

“Today, we are celebrating the American art form of tap dance with these vibrant stamps in the heart of Times Square as the Postal Service recognizes one of our nation’s greatest contributions to the world of dance,” said Lorraine G. Castellano, U.S. Postal Service New York district manager and executive in charge.

“I’m very excited that people can use these new Tap Dance stamps on their cards and letters as they truly represent this American art form,” Waag said. “For over 40 years, I’ve been dedicated to promoting tap dance as a serous form of expression, so I’m extremely proud that the Postal Service is bringing awareness to this art by issuing these dynamic stamps.”

Historians trace the deep roots of tap dancing to the beginning of the trans-Atlantic slave trade, especially to contact between enslaved Africans and Irish and Scottish indentured servants on Caribbean plantations in the 1600s. In Colonial America, a wide range of dance elements with African origins — including a relaxed torso, hip movement, improvisation, using the body as a percussive instrument, and the rhythmic shuffling, gliding or dragging of the feet — became intertwined with the rapid footwork of the Irish jig and the percussion of English clog dancing.

Whether cultures intermingled in the rural South or in crowded city neighborhoods, the result was a budding new set of hybrid dance forms based on a skilled and ever-changing combination of movement and sound.

By the 1920s, tap as we know it had fully emerged and was popular on the Broadway stage. During the 1930s and 1940s, movies tended to highlight white dancers who tapped in a choreographed style that showed the influence of dance schools, while African American dancers were more likely to be seen performing off-screen in a more improvisational style with jazz-influenced rhythms. By the 1950s, interest in tap dancing was waning, but by the 1970s, aspiring tap dancers looked to their elders and learned from their skills and experience.

As young dancers from wide-ranging backgrounds began to study tap again, new generations of professionals infused tap with influences from jazz and hip hop to express their own personalities and experiences. From its roots in popular entertainment, tap has grown into a significant art form praised as a major American contribution to world dance.

As it continues to evolve, tap will be equally at home in the most prestigious performance halls and on the streets, building on tradition while staying fresh with the infusion of new cultural influences.

The story behind the stamps will also be featured on the U.S. Postal Service Facebook and Twitter pages, posting at 2 p.m. ET. A pictorial postmark of the designated first-day-of-issue city, New York, NY, is available at usps.com/shopstamps.

The Tap Dance stamps are being issued as a Forever stamp in panes of 20. These Forever stamps will always be equal in value to the current First-Class Mail 1‑ounce price.

Customers may purchase stamps and other philatelic products through the Postal Store at usps.com/shopstamps, by calling 844-737-7826, by mail through USA Philatelic, or at Post Office locations nationwide.