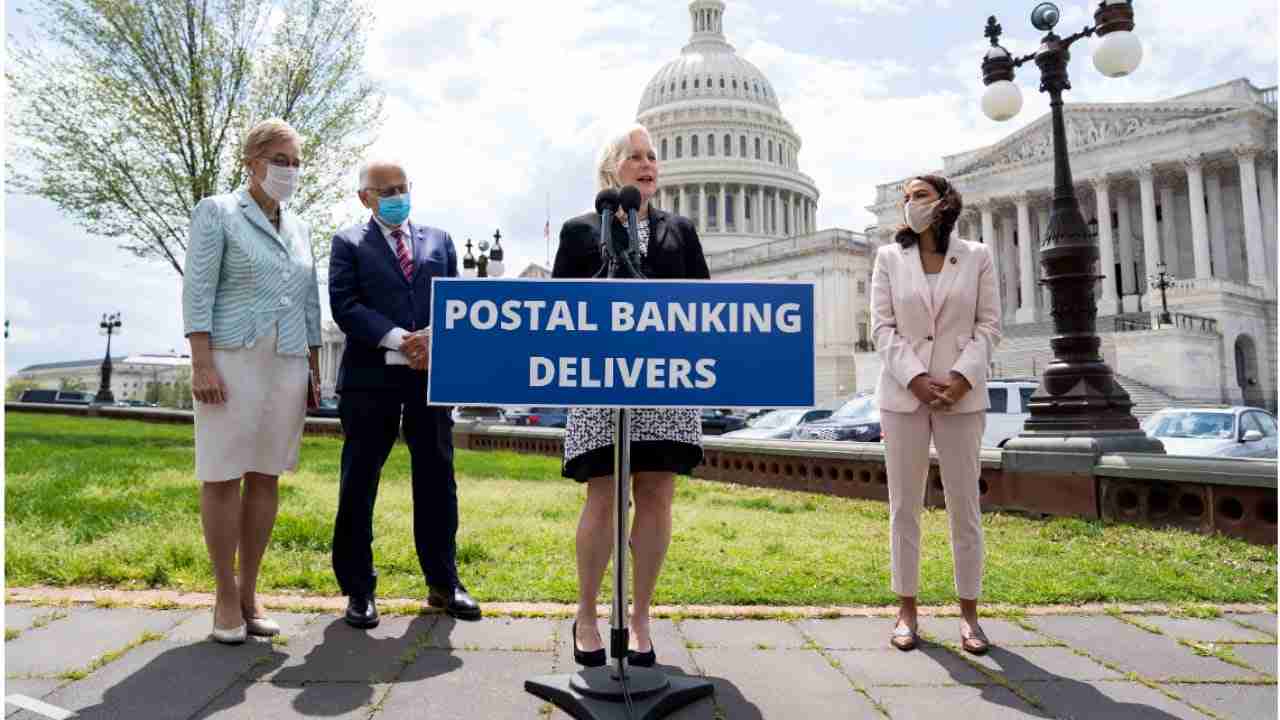 “Mainstream financial institutions and predatory lenders often take advantage of underbanked Americans with high fees and interest rates that keep them in a cycle of poverty. As families across the country try to recover from the economic crisis, establishing postal banking pilot programs would ensure these communities have financially safe and reliable banking services,” said Senator Gillibrand. “Expanding basic financial services at post offices in both rural and urban communities would help families who know just how expensive it is to be poor in America. This pilot program takes important steps to help struggling Americans and reintroduce widespread postal banking. I am proud to work alongside my colleagues to ensure it is included in the FSGG Appropriations Bill.”

“So many families in my community in The Bronx can’t afford to be banked. So instead, they go into checking cashing places and pay relatively large fees – money that’s desperately needed for food, rent and diapers. Others go the ATM, and sometimes they can only afford to take out $5, but they’re paying $3 in fees. What we are asking the Post Office to do here is very basic – checking cashing, money wiring, and taking out money from an ATM without a penalty – but it’ll make a dramatic difference in so many communities and so many families. It’ll also provide needed revenue to USPS,” said Rep. Ocasio-Cortez.

“Postal banking is that rare issue in our politics today that can unite both Democrats and Republicans, urban and rural Americans alike,” said Rep. Pascrell. “Millions of Americans at the mercy of predatory payday lenders further cements the economic inequality tearing our nation apart. With branches in every zip code – from Paterson, New Jersey, to Key West, Florida, to Barrow, Alaska – postal reach opens a world of opportunity to bridge the gap. The current Post Office leadership has failed miserably and must be replaced to begin the work of rebuilding our beloved Post Office. But postal banking is essential to that rebuilding and will help this beloved institution flourish into the next century. Postal banking must be part of American’s future.”

“The COVID-19 pandemic has demonstrated all too well that too many Americans are being left behind by the current financial system led by Wall Street bankers and rapacious payday lenders,” said Rep. Kaptur. “As the economy was plummeting and unemployment soared in 2020, the U.S. Congress moved swiftly to provide relief through economic stimulus payments, unemployment insurances, and so much more – yet many who needed the assistance the most lacked the most basic banking services to access these funds. The U.S. postal service is perfectly positioned to offer more financial services to every zip code: rural, urban, and suburban. It’s clear that we must act now to reestablish postal banking services.”

Millions of Americans live in ‘bank deserts’ — regions without immediate access to a brick and mortar bank — and nearly 63 million Americans are considered underbanked. Ninety percent of the zip codes lacking a bank or credit union are in rural areas. However, low income communities of color are also historically underserved by mainstream financial services — approximately 46% of Latino households and 49% of African American households are underbanked.

As families struggle to recover from the economic crisis caused by the pandemic, postal banking will be a critical tool to help Americans overcome financial strain. Postal Banking programs would provide essential banking services to low-income households and rural communities and safe financial alternatives to predatory financial services such as prepaid debit cards, rent-to-own stores, and overdraft fees. Instead of turning to these predatory services, families struggling to make ends meet would gain access to traditional basic banking services through the postal bank pilot program.

Additionally, establishing permanent postal banking services would strengthen the Postal Service by creating a nonprofit bank that offers low-cost checking and savings accounts, ATMs, mobile banking, and low-interest loans. According to a report from the USPS Inspector General, this proposal would create $9 billion in revenue for the Postal Service each year. Senators Gillibrand and Sanders are lead Senate sponsors of the Postal Banking Act, legislation that would establish permanent essential financial services in post offices in every community.

Full text of the Senate letter can be found below.

We write to strongly encourage you to include the below language supporting postal non-bank financial services pilot programs in the Fiscal Year 2022 (FY22) Senate Financial Services and General Government Appropriations (FSGG) Bill. These pilot programs would help Americans lacking access to mainstream financial services. These individuals are often ineligible for banking options due to poor credit or are unable to afford the fees associated with bank accounts and maintain bank account minimums. Millions of Americans even live in a ‘bank desert’ or region without immediate access to a brick and mortar bank.

The Federal Deposit Insurance Corporation found in 2017 that some 63 million adults are considered ‘underbanked’.[ii] Underbanked Americans are geographically, economically, and demographically diverse. Ninety percent of zip codes lacking a bank or credit union are in rural areas. Bank branches are also sparse in low income urban communities, with approximately 46 percent of Latino and 49 percent of African American households underbanked.

Individuals lacking access to a mainstream financial service are often forced to use nontraditional financial providers for regular or emergency financial needs. These predatory lenders routinely charge customers interest rates sometimes as high as 20 times more than the average credit card and can push borrowers into a cycle of poverty.[iii] Every year, approximately 12 million borrowers spend more than $7 billion on fees associated with payday loans.[iv] Often, it is the most vulnerable Americans that take out these loans, including those without a college degree, home renters, African Americans, those earning below $40,000 annually, and those who are separated or divorced.[v]

Expanding statutorily permitted financial services at local Post Offices would help both USPS and the individuals they serve.  We thus request that the Committee include the following report language for non-bank financial services pilot programs in the FY22 Senate FSGG Appropriations Bill:

Postal Non-Bank Financial Services Pilot Programs – The Committee recognizes that USPS is well-suited to provide affordable non-bank financial services. The Committee recognizes the benefits of non-bank financial services to provide critical assistance to tens of millions of unbanked and underbanked Americans. The Committee notes that the USPS is already the largest single provider of paper money orders in the United States, and additionally already provides electronic funds transfers and U.S. Treasury check cashing. The Committee thus directs USPS, in collaboration with the U.S. Treasury and/or Federal Reserve, to carry out pilot programs (in at least five urban zip codes and at least five rural zip codes) to expand its current non-bank financial services to surcharge-free automated teller machines, wire transfers, check cashing, and bill payment to the fullest extent permitted under current statutory authority as described in the 2015 USPS Office of the Inspector General (OIG) Report entitled ‘The Road Ahead for Postal Financial Services’ (RARC-WP-15-011). The Committee directs USPS, in collaboration with the USPS OIG, to provide a report to the Committee within one year of the enactment of this Act regarding its findings.

Additionally, we request the Committee include bill language appropriating $6,000,000 to USPS in FY22 to carry out these pilot programs to expand non-bank financial services offerings.

Thank you for your attention to and consideration of this request.