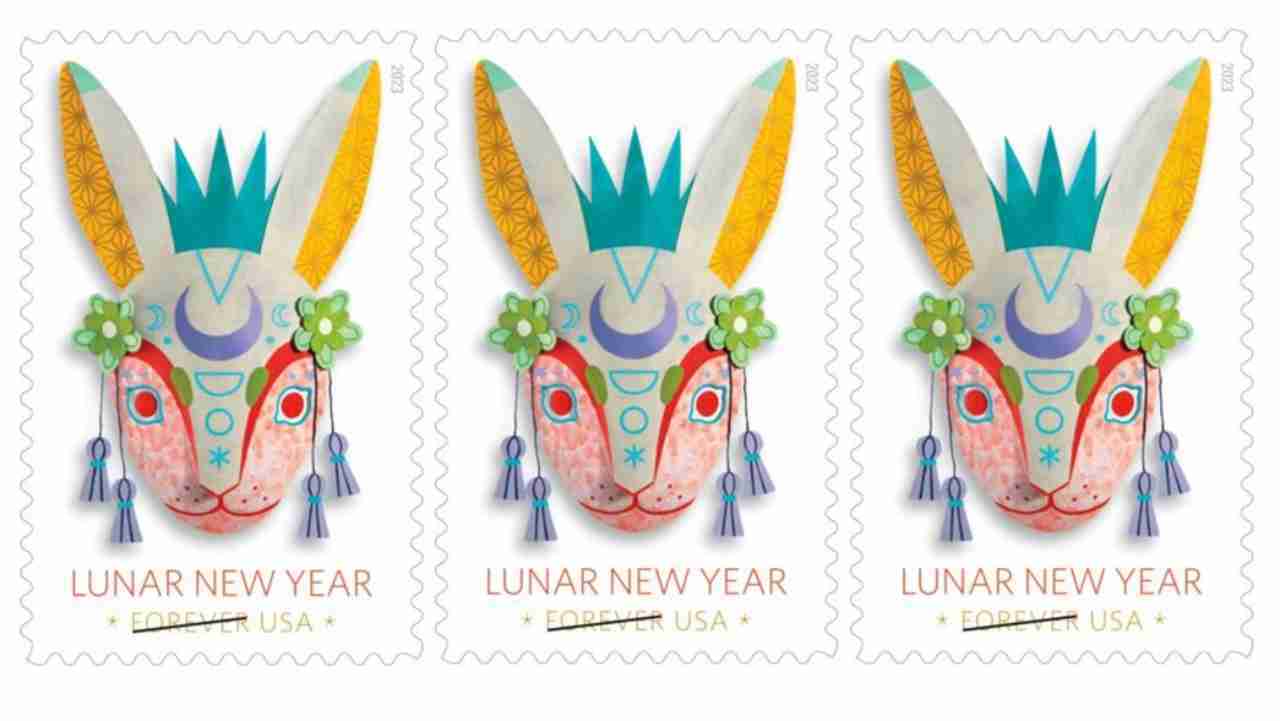 The public is asked to share the news on social media using the hashtags #LunarNewYear and #LunarNewYearRabbit.

“For more than three decades, the Postal Service has issued stamps highlighting the Lunar New Year, and they are some of the most successful stamp releases in our history. This is an important celebration for many Asian people, with an estimated 1.5 billion people around the world marking this special occasion,” said Derek Kan, a member of the USPS Board of Governors, who served as the dedicating official. “As we use this stamp in the weeks ahead, let us reflect on the American journey, and the millions of Asian Americans who have helped walk it.”

Other participants at the ceremony were London N. Breed, mayor of San Francisco; Fiona Ma, state treasurer of California, who served as the master of ceremonies; Jay Xu, director of the Asian Art Museum; Claudine Cheng, president of the APA Heritage Foundation; Donald Lu, president of the Chinese Chamber of Commerce; and Linda Ng, national president of OCA — Asian Pacific American Advocates.

“I want to thank the United States Postal Service and their workers for all the hard work they do every day. This year, we are excited to be the city to introduce the release of the Year of the Rabbit Commemorative Forever Stamp,” said San Francisco Mayor London Breed. “As we look forward to preparing for and celebrating the arrival of spring, this stamp symbolizes our continued commitment to working with one another not only during this time of the year but all year round.”

Lunar New Year is an important holiday for many Asian communities around the world. It is primarily celebrated by people of Chinese, Korean, Vietnamese, Tibetan, Mongolian, Malaysian and Filipino heritage. Across these varied cultures, many traditions exist for ringing in a new year of good luck and prosperity. Parades and pageants are common with dancers, acrobats and musicians.

Personality traits and attributes are often associated with people born in the year of a particular animal. Those born in rabbit years are said to be elegant, graceful and kind. Pink, red and purple are lucky colors for rabbits, and plantain lilies are also said to be fortunate. Romantic compatibility, career trajectory and health prospects are also believed to be linked to one’s birth sign.

Lunar New Year celebrations culminate on the night of the first full moon after Lunar New Year’s Eve, known as the Lantern Festival in Chinese culture. In the United States and elsewhere, the festival is marked with grand parades and brilliant lanterns decorating public spaces.

“At the Asian Art Museum, our mission is to share a broader, richer and more inclusive story of the diverse America we live in today,” said Jay Xu, the Barbara Bass Bakar director and CEO of the Asian Art Museum. “Hope characterizes the Year of the Rabbit in 2023 — and it fills me with hope to unveil this unique Lunar New Year stamp at our museum, and to showcase the power of art everywhere to help tell that special story with beauty and joy.”

In observance of this holiday, the Postal Service introduced its third series of Lunar New Year stamps in 2020. This latest series will continue through 2031 with stamps for the Year of the Dragon, Snake, Horse, Ram, Monkey, Rooster, Dog and Boar still to come.

Art director Antonio Alcalá worked on the stamp design with artist Camille Chew to create imagery that is fresh, fun and celebratory. Calling to mind the elaborately decorated masks used in the dragon or lion dances often performed during Lunar New Year parades, Chew’s three-dimensional masks are a contemporary take on the long tradition of paper-cut folk-art crafts created during this auspicious time of year.

The Lunar New Year stamp is available in panes of 20.