The United States Postal Service (USPS) has awarded a contract for the Next Generation Delivery Vehicle (NGDV) (see figure), and recently ordered about 40,000 gas and 10,000 electric vehicles (about 20 percent electric). USPS informed its decision by conducting an analysis of both gas and electric NGDVs. This analysis included factors such as acquisition, maintenance, and fuel costs. Using information from the analysis, USPS created a model to identify the lowest-cost vehicle for each postal route in the U.S. for each of the next 30 years.

Image of the Next Generation Delivery Vehicle 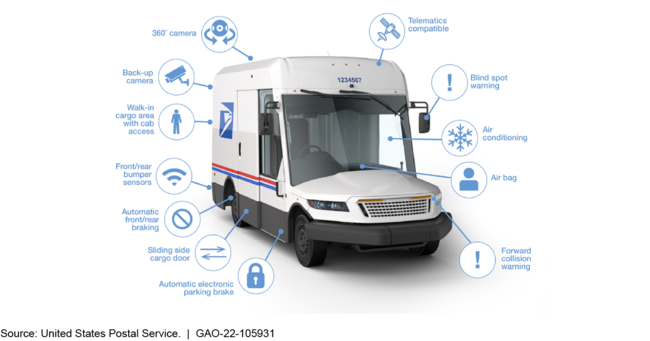 GAO’s preliminary analysis raises questions regarding the way in which USPS’s assumptions estimate the costs and benefits of the gas and electric NGDV. Specifically, USPS used a gas price that is almost $2 per gallon less than the current national average price of gas and assumed maintenance would be more expensive for an electric vehicle than a gas vehicle. In ongoing work, GAO plans to test the effect of changing these assumptions.

In prior and ongoing work, GAO has identified the following three factors that could affect widespread electric vehicle acquisition within federal fleets.

Why GAO Did This Study

USPS operates almost 200,000 vehicles that provide mail delivery across the country. USPS, along with the rest of the federal government, relies largely on gas or diesel fuel vehicles in its fleet. Efforts to transition the USPS and other federal fleets to electric vehicles are underway. In December 2021, the Biden Administration issued an Executive Order calling for federal vehicle acquisitions to be zero-emission vehicles by 2035, including 100 percent zero-emission light-duty vehicle acquisitions by 2027.

This statement provides GAO’s preliminary observations on (1) USPS’s efforts to determine the number of gas and electric delivery vehicles to purchase, and (2) factors that may affect the transition of federal fleets to electric vehicles.