The term “postal family” has a new meaning in Rocheport, MO. 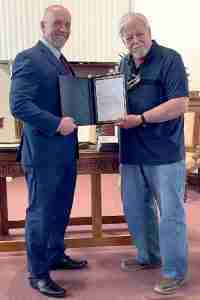 The town recently inducted William H. Phillips and his descendants into the Rocheport Hall of Fame. From 1854-1956, Phillips or a member of his family served as the town’s postmaster.

“We are so proud of the family and their impact through the Post Office that they would catch the attention of the Postmaster General,” said Gene Baumann, president of the Friends of Rocheport Society.

The Rocheport Post Office, located in what was a trading post town on the banks of the Missouri River, was established in 1833.

He was succeeded by his son-in-law William Slade, his daughter Susan Slade, grandson William Slade II and granddaughter Lou A. Slade. The family concluded more than 100 years of service as postmasters in 1956 when Phillips’ great-granddaughter, Mary Slade, retired.

One member of the family survives but was unable to attend the ceremony due to health reasons.

“We take pride in delivering for America,” said Mark Inglett, a USPS strategic communications specialist who participated in the ceremony. “I can’t think of any better way for that to be represented than over a century of service from one family.”