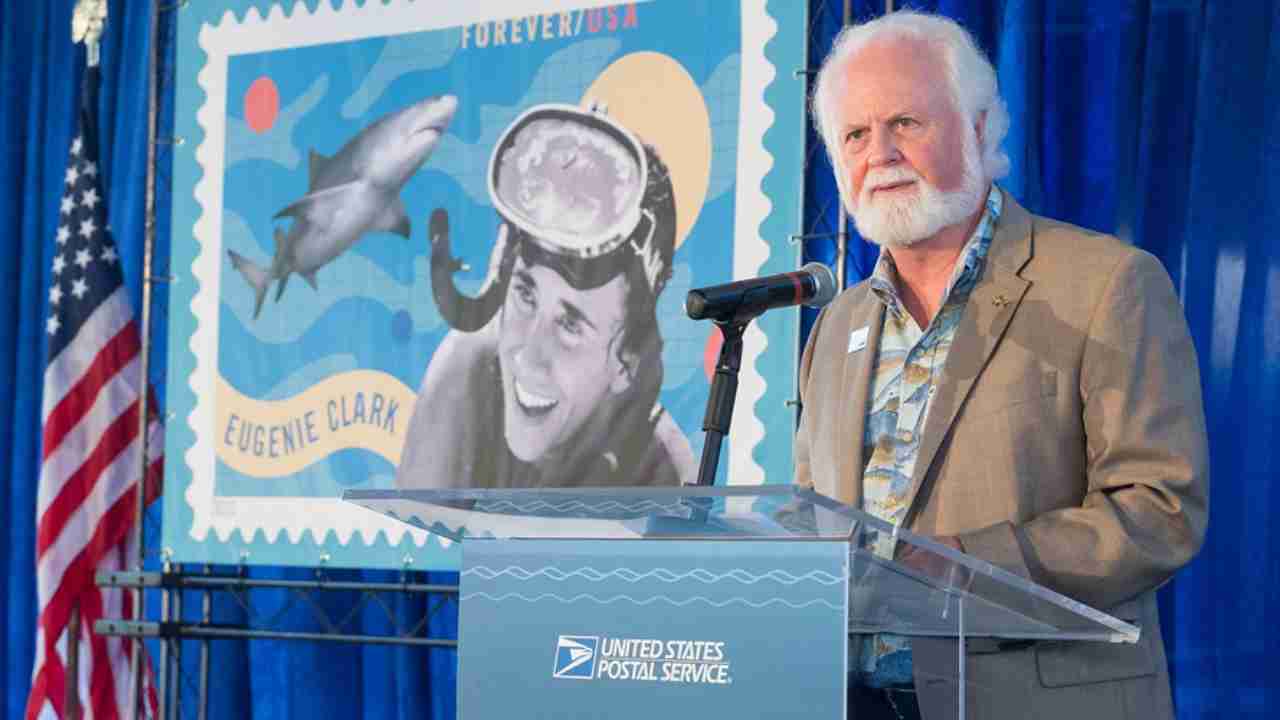 A stamp honoring pioneering marine biologist Eugenie Clark was dedicated May 4 at the center she helped found, Mote Marine Laboratory and Aquarium in Sarasota, FL.

“One of the goals of the Postal Service’s stamp program is to celebrate the people who represent the best of our nation, and Eugenie Clark — I should say Dr. Clark or the ‘Shark Lady’ — certainly deserves this recognition,” said Angela H. Curtis, the Postal Service’s delivery operations vice president.

“She was a brilliant scientist whose groundbreaking work added to our understanding of sharks and marine environments.”

May 4 would have been Clark’s 100th birthday.

The ceremony drew an overflow crowd of more than 400. It was not streamed online.

However, USPS posted a 10-minute prerecorded video on its Facebook page the day of the event featuring remarks from Clark’s son, Nikolas Konstantinou; Michael P. Crosby, president of Mote; and David Doubilet, a National Geographic photographer who accompanied Clark on many of her undersea adventures and whose portrait of her graces the stamp.

“The use of my image of Genie for the postage stamp is the best use of an image in my career,” Doubilet said. “And it’s my favorite image of her.

“Genie broke glass ceilings without considering they were there to break. She was an influencer before the word existed,” he said.

Crosby offered similar sentiments. “She was really a trailblazer. When you think about the era that she was coming up and becoming a professional scientist — women didn’t do that. But Genie did,” he said.

Konstantinou said that of his mother’s many achievements, one in particular stands out in his mind.

Clark was fascinated by Ras Muhammad, a deep reef off the tip of the Sinai Peninsula in Egypt.

“It was her favorite work site,” Konstantinou said.

He was with her on a trip there in 1982 when she got wind that a fishing tournament was planned for the area.

Clark made a beeline for the trip’s organizer, who turned out to be none other than the son of Egyptian President Anwar Sadat.

It turns out Sadat’s son chose the site because he had heard Clark speak about the amazing variety of fish at Ras Muhammad.

“She told him, ‘No, you can’t fish these fish. You have to protect these reefs for future generations,’” Konstantinou recalled.

“And Sadat and the son put into place the first national park instituted in Egypt. And it happened to be a marine park. And I think that’s pretty incredible,” Konstantinou said.

Mote Laboratory and Aquarium will host a yearlong series of events honoring the centennial of Clark’s birth.

Eugenie Clark Forever stamps are available at Post Offices and at usps.com/shopstamps.